Imcyra the many blessed. Eclipse entry.

Imcyra the many blessed, Warden of the street of gods in ancient Themyskyr.
All faiths find their home in Themyskyr. Monks and pilgrims mingle with living saints and miracle workers outside the hundred identical temples that line the ancient street.

Imcyras job has always been a vital one, For it is her task to walk the street of gods and root out the worship of chaos, for even here the foul gods will find no welcome.

Now as chaos sweeps the land once more she finds her task has become ever more difficult, for she must check every home and sewer of the city for traces of the foul cults that have oft sprung up in the guise of some minor deity.
Her body bares the symbols and prayers of many different gods, painted upon the ash from the many pyres and braziers that sit outside the cities many places of worship. 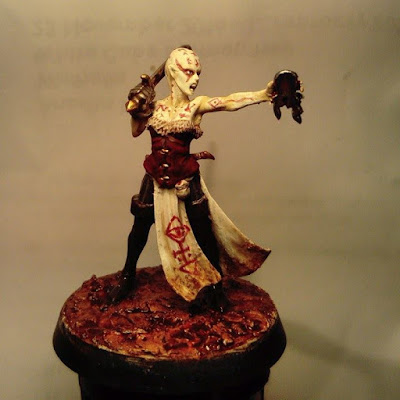 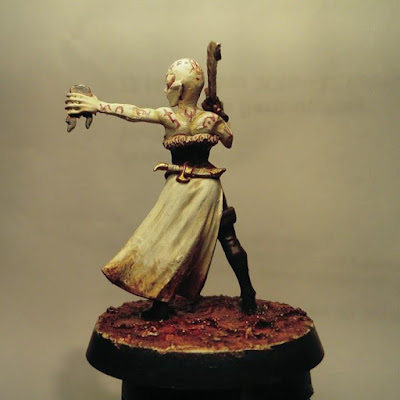 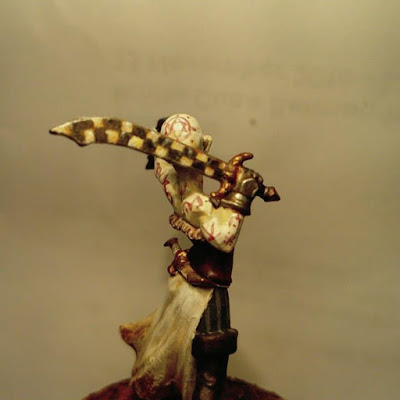 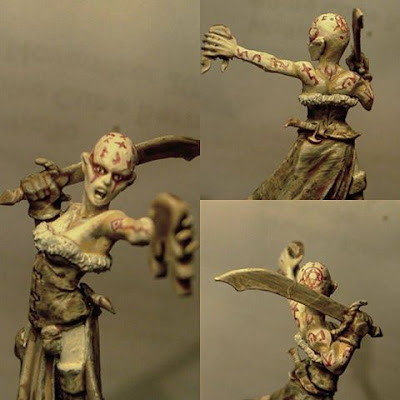 So here she is, My entry to the Ex Profundis eclipse competition.
I had alot of fun with this one, As I've wanted to build something based on the dark elf sorceress model for a long time and i had a desire to make a fairly unconventional witch hunter , But still keep the end miniature quite simple and minimal.
conversion wise there's nothing major going on here, a bit of an arm resculpt, an added hand from a lord of the rings miniature , some green stuff clothing and boot cuffs and a smoothed out head.I think it does enough to pull the model silhouette away from the original figure and give her a really nice eclectic spiritual feel, without feeling chaotic.

Painting wise i wanted her to look quite earth and simple but still retain that look of a zealot, So i went with a simple palette of reds browns and blacks to contrast with her pale ashen skin and bright tattoos.
The tattoos were really fun to paint and I really just made them up as i went along.
This was a miniature where the building and painting influenced everything about the back story, I had no real conception of who she was when i started building her but once i got her tattoos and face done i instantly started building a story around them.

I also wanted to link her in with some of my other warband members, So i decided to use her to flesh out the city of Themyskyr, giving it a bit more depth in my own head as i imagine both Imcyra and Dainna wondering the same streets. 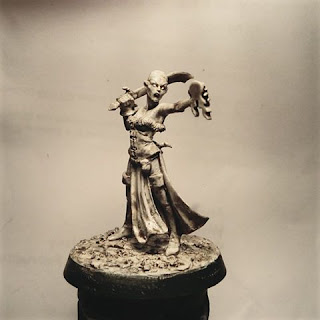