From the questors lodges of the great wildernesses to the very edges of the realm of chaos,
The warrior now known as the dawn knight has travelled far from his brother warriors for many decades.
He took up the quest upon his first reforging, for in the moment of his
deaths ascendance he saw in his minds eye a darkness, spreading from an unknown place
to shroud all the realms.
For long he travelled from city to city, wild to wild, ruin to ruin, all the time gathering whispers of the many lost and hidden things that threaten the mortal realms.

It was one such whisper that brought him to the realm of shadow, to the great marsh, and to a town of rotten wood built upon the broken bones of a sunken city of white stone and green metal.
It was here that he slew a foul beast that had been plaguing the villagers for many moons,
And it was here that he fell in battle to it's vicious bite.

But he did not die.Instead he awoke within the flooded ruins of the great cathedral at the centre of the ancient city.Around him the townsfolk had gathered, and in their hands they bore his armour, polished to a deep black and painted with the sigil of the coming dawn, A light come to burn away the darkness.
The townsfolk believed him an angel, a hero of the old stories as was painted into the ancient cathedral roof centuries before, come to bring light and peace back to the great marsh.
Now they follow him, and he has taken them all as squire, For he feels that within this shrouded realm, the secrets that he seeks and the gathering dark will be found. 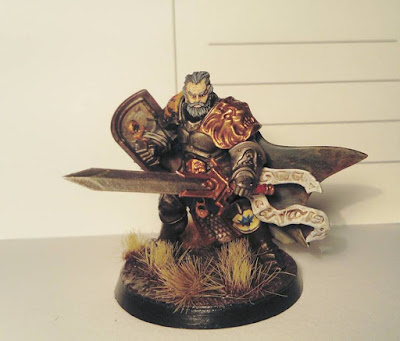 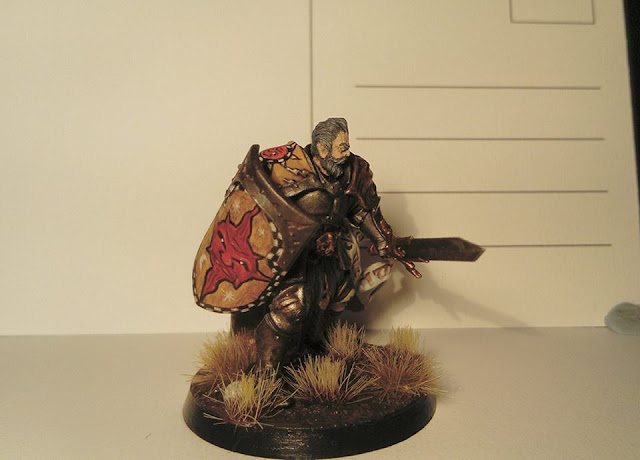 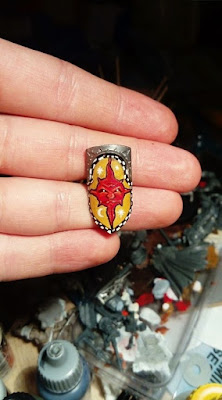 For the dawn knight I wanted a real oldschool feel.I wanted some good old fashioned heraldry as would suite a travelling warrior, and a really characterful face.
The great thing about the stormcast models is the lovely flat areas that really suite freehand design work, And I'm pretty happy with the shield design i chose.Partly it was inspired by the old orc shields, and party it was a homage to John Blanches stormcast sketches which features his trademark "All the faces all the time" design style.
While i felt like the armour itself was a little plane and i could have done more with weathering, I'm happy enough with my Bryan Blessed lookalike and he will be a fine leader of his band of trusty pilgrims!
One small note on the model that i would give to someone building one would be to get rid of the chainmail and the scroll.To me they don't do anything to strengthen the silhouette of the figure and there's no real way to paint them that matches a dirtier freehand style. 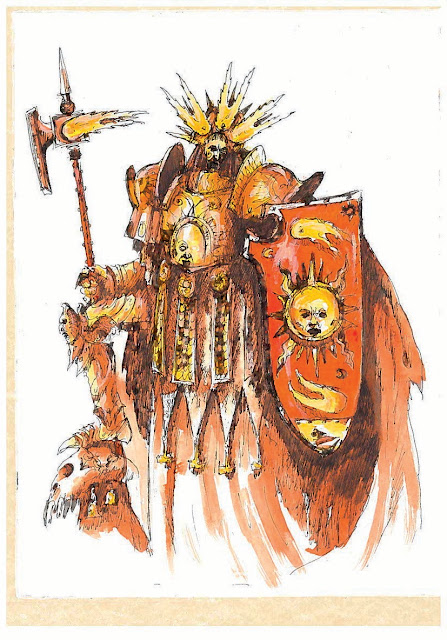