The realm of shadow is not the most ideal place for those who follow Sigmar's light.
Faith can be misled by foul spirits, prayers become lost and trapped in the all encompassing fog, turning to foul whispers on the chill wind.
Those who come to the shrouded land following the light of the god king must be hard and brutal to survive, their faith must be unbreakable, for nowhere else save the dread realms of chaos will
they be so very isolated from all that is good.


Reinhold Heillbrand is one such traveller. A witch hunter by both trade and choice, Heillbrand is known as the scourge of spirits, For he makes it his lifes work to vanquish those who would invoke the dead and the chaotic to corrupt the rightful lands of the God king.


Heillbrand has come to the realm of shadow fresh from the purging of Excelsis, where the seers and secret merchants talk of ancient mysteries soon to be resolved and long lost truths to be rediscovered deep within the realm of shadow and mist.They speak of rites,both holy and corrupt, and a lost isle among the mist.
They speak of the Mystarikum.
To Heillbrand, they speak of corruption, And he would see these rumours quashed. 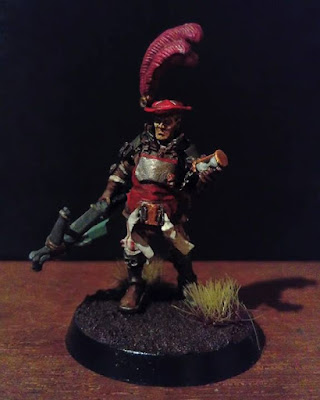 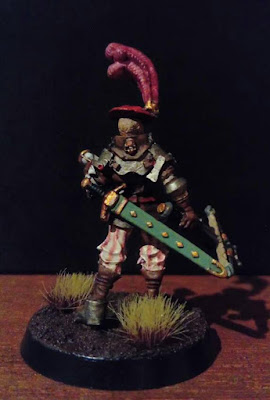 Reinhold Heillbrand is built from the forge world event only arbite model.I had been after this model for a while and i actually came across it by chance in a trade, with two of his cyber mastiffs. (sadly only the one arbite-a man can dream.)
He say on my desk for a long while as i was unsure what to do with him.I love the figure but i don't really play any game in the 40k universe, and despite painting alot of the miniatures and loving the style, It felt a waste not to game with such a cool and imposing character.
Eventually i decided i needed a witch hunter and after much hand wringing about taking the knife to a figure i will never get a duplicate of, I bit the crossbow bolt and decided to bring him into the world of AOS.

The conversion work is fairly simple since the arbiter already had a bit of a medieval look to him, Just a crossbow to replace his shock maul, a sand timer to replace his walky talky gadget, and the removal of any 40k iconography.
After that i have him a sword from the old empire sprue and decided to paint him with a nice mixture of reds and browns to give him that old school inquisition style. I made sure he wasn't too murky by giving him nice stripped pantaloons (A must when witch hunting.) and painting his sword a nice gem green to add a small dash of colour to him.

I may work back into him and rebase him as he was finished before I started the Mystarikum and as such his base is a little bit too firey.


Game with he might get a warband, or I might have him as a recurring NPC to act as foil to the various heroes and villains trying to claim the secrets of the Mystarikum for themselves.