Marshes end is a quiet place.
Built atop the jutting spires of a sunken city of marble and copper, It rests on the
horizon like a crown of broken jetties and rotten wood houses.

To the south lies the great marsh, vast and featureless save for a few places where dark and terrible things still dwell, and around this sits the black wood, a forest of such depth that some say daylight has never touched its floor, and the ice and mist have become cruel....

To the north, the nameless sea.Calm and mist covered, it stretches to the grey horizon.
No one comes to marshes end save for those who seek the silence of the end of the world or the occasional restless revenant, risen from the cold mire.

Or rather, that's how it used to be.
As news of the Mystarikum has spread across the realms, So marshes end has found itself visited by many strangers, some mighty, some insidious....

It is Burik and his trusty guard dog Huund who had for many years kept the towns borders safe, watched the marshes mists for signs of foul spirits and patrolled to the edge of the blackwood
when news of nameless horrors spread.

Now Burik has taken up with the dawn knight, and has declared himself the Moonguard.
Where the dawn knight rests, Burik watches over him, acts as squire and for his part helps him in combat.

Accompanying him is Huund, Guard dog of the long since banished mayor of marshes end.A loyal and battle scarred beast, Huund has become a companion of all in the dawn knights company,
None more so than the wizard Therin, whom he takes great joy in
guarding, If only for the heat the wizard can conjure on cold nights. 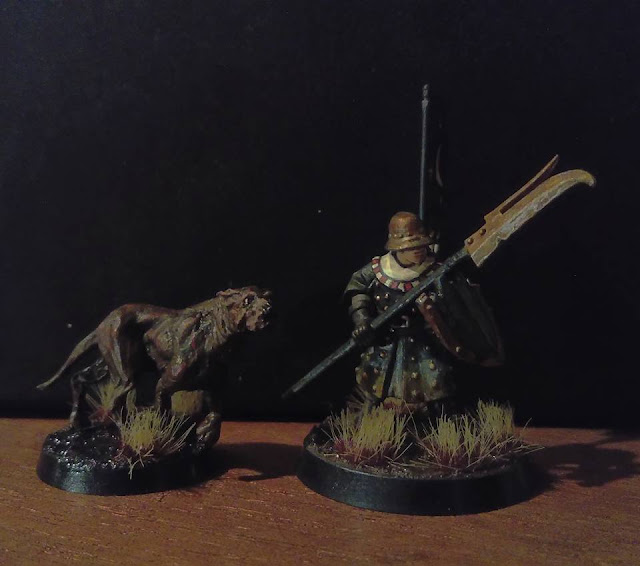 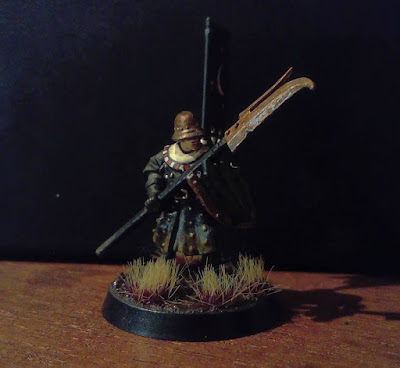 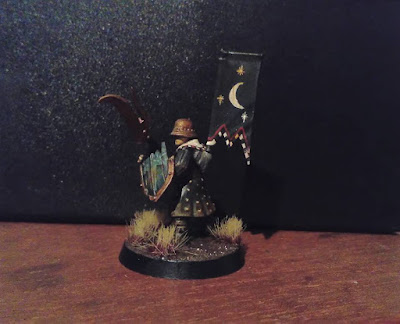 Burik is built from a Bretonian man at arms body and bill, With a perry war of the roses head, skeleton shield and (dark?) Eldar back banner.
I wanted him to look like he has built or cobbled together his guards kit from what local supplies were available in a run down fishing town, so a shield with faded heraldry and a rain stained banner with his own simple design on seemed like a fun way to put this across.
Added to this is a healthy layer of rust and grime and i think the effect comes through.
Since he's the third model for the warband he has the job of really cementing the style I want to get across, and it took me a while to decide how he should be painted. In the end i decided that while Therin was dark and brooding and the dawn knight was shining and bright, the real humans of this band should be somewhere in-between, A grimy grey bunch of dour soldiers and militia so i went with a fairly subdued colour palette, Mostly greys and browns with reds whites and a faded turquise to break up the monochrome nature of the robes.

For Huund I simple covered up the various cybernetic implants of the cyber mastiff that came with the game day enforcer model before painting. He was built up from a almost black brown to a middle brown, then detailed with purple bruising and red scars to give him a bit more of a battle hardened look.
He might not find his way into the warband as a starting member, But once I have the points he'll be acting as a gryph hound in game terms.